In a manner of speaking, New York City would definitely be crippled if its sprawling network of subway systems were to shut off spontaneously. This mass network of underground tunnels, railways, and mass transit trains transports hundreds of millions of people from one end of the city to another on a daily basis. Given the fact that so many people depend on these trains for daily commutes, you can understand why the injury rate could be so high among these stations.

So, what exactly is the risk of riding a subway system in New York City? What are the death and injury rates throughout the MTA station network?

Let’s take a closer look and find out some more information.

The Massive Size of the MTA Transit 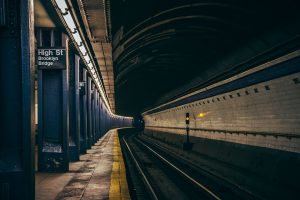 Exactly how big is the passenger load for the MTA system in New York City, you may ask? Consider the fact that, on average, in 2018 alone, 5,438,947 people rode the MTA transit system. Now consider that a staggering 1,680,060,402 rode this system throughout the entirety of 2018, excluding passenger transfers and exits.

On average, the majority of accidents that take place on MTA subway stations are purely accidental, with only a small collection of cases involving suicide and murder. As shown in findings featured in the Journal of Forensic Science, only 211 people died on MTA subway trains. Based on the statistics, 76 cases were accidental, while an additional 20 were listed as “unknown,” meaning that the majority of these incidences were most likely not driven by malicious intent.

Keep in mind that 111 incidents stemmed from suicide, while only four were related to murder.

The Brutality of Injuries on Subway Tracks

While electrocution and concussions are just a few of the terrible consequences of subway-related accidents, the American Journal of Surgery also sheds light on a particularly nasty and unfortunately-common outcome of slipping and falling along the subway: amputations. In one study, based on information collected from 1989 to 2003, doctors assessed 41 patients who had been taken to NYC Health + Hospitals/Bellevue (formerly Bellevue Hospital Center) following accidental extremity amputations due to subway accidents:

Subways might be convenient methods of traveling from one place to another across the jungle of New York City, but these underground tunnels can prove to be extremely hazardous at times, especially when people do not exercise caution. In the blink of an eye, your visit to the subway can turn into a chaotic, catastrophic accident that can inflict moderate to life-threatening injuries and cause tremendous emotional distress.

Although this might be difficult, though, you must remain calm. With the assistance of a lawyer who is experienced with personal injury cases, you can gather viable resources to create a strong case in court.

We at Gattuso & Ciotoli have more than 50 years of combined legal experience and deliver the some of the most high-quality legal services to victims of a wide variety of accidents in the vicinity of Syracuse, New York. We value your perspective on your case and your goals for the future and ready to help you receive the justice you deserve. For more information on our four practice areas or your legal matter, contact us at (315) 314-8000 today.